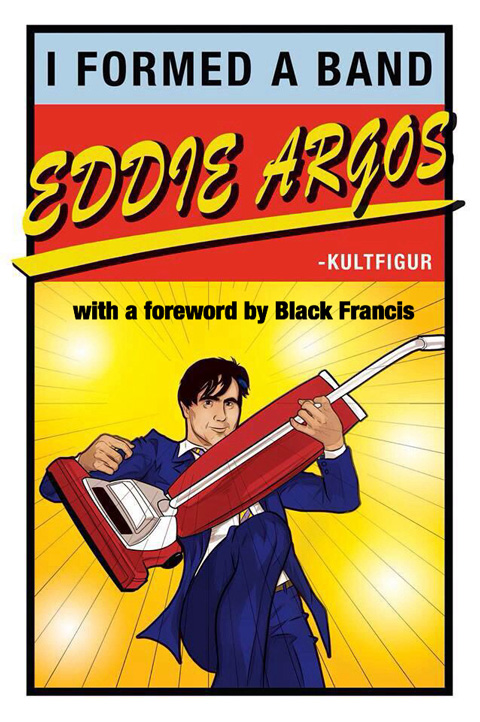 If you’re even only vaguely aware of Art Brut, it’s probably as a result of the hype surrounding their 2004 debut single: Formed a Band. It’s a catchy arty pop song which goes, for the most part: ‘We formed a band! We formed a band! Look at us, we formed a band!’ Luckily, lead singer Eddie Argos’s book is slightly more loquacious than that, and, like the song, it captures the wonder of actually being in a band and getting to perform your songs to thousands of people on different stages across the world.

That joyous bewilderment is understandable for two reasons. Firstly, as the book describes, Argos had a pretty inauspicious beginning to his musical career. In his first band The Art Goblins, his on-stage role was to play a vacuum cleaner and escape from a sack. That’s possibly to compensate for the fact that, as Argos himself admits, he hasn’t ‘been blessed with the most commercial of singing voices.’ Secondly (and sort of paradoxically if you believe in the Protestant work ethic) Argos’s story is one of psychotic single-mindedness and self-assuredness. Totally convinced he was going to be in a successful band, he didn’t bother to study for his A-Levels, and, unlike the rest of The Art Goblins, finished school with no qualifications. And that led to the classic romantic impoverished artist lifestyle of stealing cheese and ham off other bands’ riders in order to avoid starvation.

So partly this is a rags to riches story. It’s possible that if you start out playing a vacuum cleaner, you could end up having your album produced by Black Francis, if you just believe in yourself enough. And whilst it’s never far from your mind that the thousands of people who’ve tried to tread this path most likely now can’t afford the book you’re holding in your hands, there is something incredibly infectious about Argos’s enthusiasm that makes you think ‘yeah, maybe I’ll get to kick Paul McCartney in the shin at the NME awards if I practice playing my mum’s Hoover every day.’

I’ll tell you this now, because Argos waits until the epilogue to admit it:

‘I have no advice to give and this book is just a collection of amusing anecdotes and a celebration of the fun that happens when you are in a band. I’m ok with that, I hope you are too.’

And I was okay with it, though there was quite a lot of clichéd rock star crap about drinking too much. I also didn’t get quite as much hilarity out of Argos reliving being punched in the face by Kele from Bloc Party as he seems to, but each to his own. I’m sure there are a few people left in the world that wouldn’t find that anecdote about Argos kicking Sir Macca in the shin funny. Well, I’m willing to consider the possibility.

The best anecdotes, though, are the ones that show the tension between wanting to ‘make it’ (and if like Argos you’ve appeared naked on the front cover of NME, it’s pretty safe to say you’ve ‘made it’) and trying to keep your artistic integrity. That wobbly line was straightened out through a revelation involving Argos, Anton Newcombe (of The Brian Jonestown Massacre) and a bloody tooth of indeterminate origin. That anecdote alone justifies the existence of this book.

I Formed A Band is full of the humour and sincerity I’ve subsequently discovered in Art Brut’s music.  It’s not a manual for how to form a band, but a celebration of being in one. That joy might just send a million kids scrambling for their parents’ Hoovers.

I Formed a Band by Eddie Argos is out now on  Lo Fi Punk Rock Motherfucking Press. Get yours here